So let's get going with a bit more exciting things than the simple setup, and let's start with hypercalls. Hypercalls can be thought of as syscalls but not from userland -> kernel, but kernel -> hypervisor. In essence, they are precisely that, but like always, the devil is in the details.

NB: All my descriptions are based on x64 architecture. The main logic on x86 is similar, but of course, there are differences in registry names, and in many cases, x86 needs 2 registries to do the same thing that is done by one in x64.

Kernel triggers hypercall with vmcall opcode (in case of AMD CPU, the opcode is vmmcall) that will transfer execution to the hypervisor. Now there is a question of parameters that will be given with the hypercall. This is actually well described by Microsoft in the "Hypervisor Top-Level Functional Specification" document [https://docs.microsoft.com/en-us/virtualization/hyper-v-on-windows/reference/tlfs] at chapter 3. But I will try to cover it in a bit smaller pieces:

Alex Ionescu had an excellent blog post about this, but it's down currently, so I will add my own version. If in the future he restores it, then definitely give it a read!!!

But anyway, making hypercall yourself. First, you need code execution in the kernel - it's not possible to do hypercalls from userland directly. The most natural solution for this is to write a driver and then use it as a proxy. Doing this means you can write fuzzing (or any other) logic in userland.

I will not cover the basics of writing windows drivers - mainly because I have never been a driver developer and really don't know that much about it. Also, because there are a lot of much better tutorials and guides.

But I believe I can still cover the "making hypercall" part of the driver. To describe this better I first break the functionality into 2 pieces and then describe the implementation of each piece:

While it is entirely possible to just add vmcall/vmmcall opcodes to your driver to trigger the hypercalls, it is not necessary. The Windows kernel exports a function called HvlInvokeHypercall that is a wrapper around the call to ntHvcallCodeVa trampoline. This function is not included in any header files (as much as I know) abd should be referenced something like this when used:

Of course, the return type and first parameter type should be replaced with the types that allow easier access to sub elements. For example:

After this, the fast hypercall (not the extended one) can be made simply by calling this function with almost no additional effort.

But of course, this is not enough, since we need buffers and their physical addresses for "slow" hypercalls.

This is in many parts based on Alex Ionescu's blog post. I used to do it a bit differently, but his approach is better.

So first, we allocate some pages for the buffer (no matter input or output) with function MmAllocatePartitionNodePagesForMdlEx. This is not a publicly documented method but allows us to get just such allocation as is needed. The function definition is such:


So in the end, the call can be something like this:

Now, if the pmdl is not NULL, the allocation worked, and we have a mdl structure that points to our buffer. To get the virtual memory pointer (so we can read/write) to it, we run a typical MmGetSystemAddressForMdlSafe function (with MdlMappingNoExecute flag is reasonable because we do not need to execute code from there). And to get a physical address, there is MmGetMdlPfnArray function (just don't forget to shift by page size). All in all, the code for both (without error handling) is such:

Like said on the last blog post, it's easy to monitor hypercalls via Windbg. You just have to use hardware breakpoint, not software ones (at least in the trampoline part). Now let's move on based on that and see how it's easiest to figure out what common hypercalls might do based on public symbol information about the kernel and already covered knowledge about the hypercalls.

Breaking on hypercalls and getting basic info

I use the same breakpoint as in the last post but I add some extra info that will be displayed on every hypercall:

This simple breakpoint will now display hypercall own number and fast value from it. We can extend it to display even more to see how often other values are used:

Since nt!HvcallInitiateHypercall is same as HvlInvokeHypercall, we know that it's a merely a wrapper around hypercall trampoline. But it's called by the function nt!HvlpCreateRootVirtualProcessor so it can be deduced that this hypercall should execute the functionality in hypervisor that creates (or is at least connected to) root virtual processor.

With a lot of hypercalls, there is the possibility to understand their use via kernel. There is also a good possibility that by reverse-engineering these kernel functions, you can figure out the structure of the input and output buffer that makes reversing hypervisor much easier. Public symbols give an excellent headstart on such things.

If you let Windows boot up and then try to use such an approach, you quite quickly run into a problem. Windows is regularly doing some hypercalls, and it's quite hard to do anything on the system to trigger some new type of hypercall (handling guest VM-s, for example). 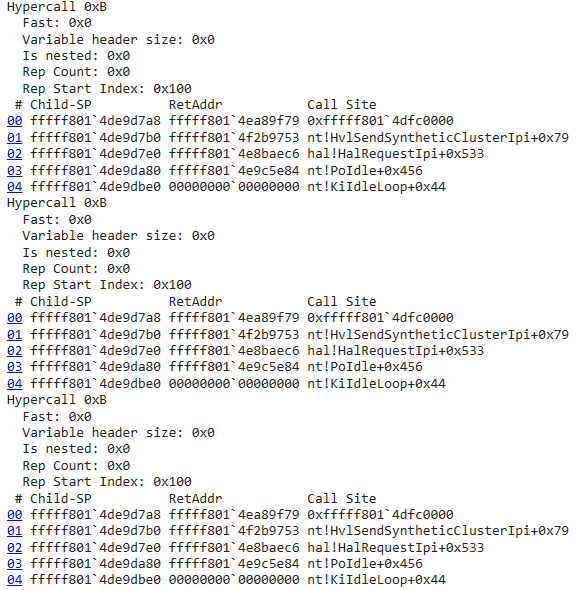 You can, of course, add conditions to the breakpoints, but these are checked only after the debugger has already stopped the execution, so it is still not usable. My approach in this has been a bit weird, and I don't know how many others use the same method, but it works well. I look for some block of memory in Windows kernel that is not used but is already executable (most accessible location is the end of .text segment in Windows kernel - in the current version, there is almost half a page of zeroed out executable memory and it's there always). I then write some small assembly (https://defuse.ca/online-x86-assembler.htm is a godsend for doing it without any other tools, shout out to https://twitter.com/defusesec) that will redirect some hypercalls directly to the trampoline and only break with others. Finally, I redirect nt!HvcallCodeVa to this small assembly and can now ignore annoying hypercalls.

For doing this step-by-step (in reality, it makes sense to be automated):

Hopefully, this information opens some options or ideas for people who are starting with hypercall research. In the next couple of weeks, I will also add some scripts (or write a separate plugin - I have not decided yet) to more comfortably show some of this information and to automatically generate a machine code that helps with filtering stuff. I will also continue with this series. Next time focusing on the hypervisor side of the hypercalls. Take care!